The Apple event that heralds the unveiling of the 2018 iPhone models is scheduled to start in an hour, at 10am PDT or 10:30am IST, ending the wait of fans who have been looking forward to the next-generation iPhones for a year. The Apple iPhone event today will reportedly bring bigger screens than ever to the lineup, going as big as 6.5-inch. The iPhone launch event will see and may even see the launch of the dual-SIM model, a long-awaited feature in markets such as China, India, and several countries in Europe. Of course, iPhone will not be the only product Apple will unveil tonight, with new Apple Watch models being a likely candidate to get a refresh and perhaps a new version of AirPods. Other products you can expect from the event are a pro-focused Mac mini, a wireless charger, and an entry-level MacBook model.

We will be at the Apple event that will witness the iPhone 2018 models to bring to you all the live updates in real-time. All you need to do is to keep refreshing this page every few minutes to get fast updates. You can also watch the event live on iPhones and other iOS devices, Apple TV, macOS devices, Microsoft Edge, Google Chrome, Mozilla Firefox browsers, and Twitter. 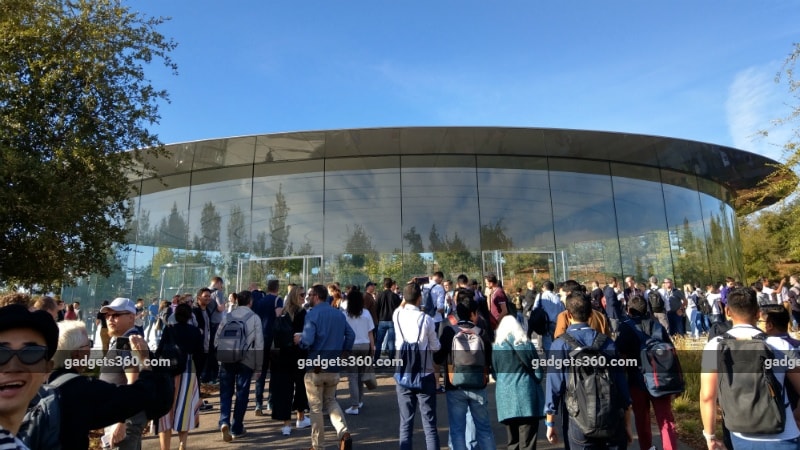 The new Apple flagship smartphone range is expected to include three models once again, a 5.8-inch OLED iPhone Xs, 6.5-inch OLED iPhone Xs Max, and a 6.1-inch LCD iPhone Xr, according to multiple leaks. The OLED models are expected to sport dual cameras, Face ID, and 3D Touch, while the LCD variant is tipped to sport a single camera, and no 3D Touch. The LCD variant is also expected to sport dual-SIM slots, but that will be exclusive to China only, as per reports. Both the OLED models are supposed to sport similar specifications – the latest Apple A12 SoC, 4GB of RAM, 64GB/ 256GB/ 512GB of inbuilt storage, dual 12-megapixel rear camera sensors, and a stainless steel casing.

Most of the previous reports suggested that the three iPhones will be priced rather aggressively, and even noted analyst Ming-Chi Kuo suggested a pricing structure that starts with as low as $600 (roughly Rs. 43,600). However, recent reports refute these claims with the cheapest iPhones’ starting price pegged at CNY 5,888 (roughly Rs. 62,100), the iPhone Xs will be priced starting at CNY 7,388 (approximately Rs. 77,900), and the iPhone Xs Max might start at CNY 8,388 (about Rs. 88,400). An analyst from Goldman Sachs also said that the cheapest iPhone, will actually come at a base price of $849 (roughly Rs. 61,500) instead of what was the previously predicted $699 (around Rs. 50,600). In any case, we are just a day away from the big launch event, and prices of all the three variants will be unveiled soon.

As for the fourth-generation Apple Watch models are said to feature a high-resolution display and maybe a bigger display. Also expect ECG integration and ceramic backs for the Apple Watch Series 4, along with a new watch face.